Regular maintenance is essential to maintain the efficiency of irrigation and drip systems as well as ensuring the maximum possible life of the system. Water quality plays a big part in determining the optimum maintenance schedule for any system. There are three causes of clogging to be considered when designing an irrigation system maintenance program: Biological, chemical and physical. CleanOxide, which is Chlorine Dioxide, is the most effective treatment against biological clogging hazards. 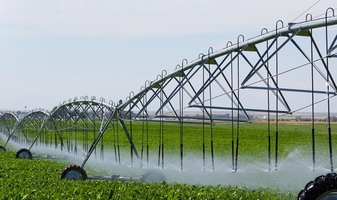 Conventional chlorine, bromine and non-oxidising biocides are very poor at controlling microorganisms in irrigation pipes because of short contact times unless dosed at very high concentrations. Even at high dose rates, these disinfectants do not control biofilm.

High concentrations of disinfectant in irrigation water are also potentially harmful to the plants being irrigated. Most non-oxidising biocides are unacceptable for spraying on to food crops.

Chlorine dioxide overcomes all these problems. It is effective against algae, bacteria, bacterial spores.fungi, protozoa and viruses and is the only method of disinfection that is effective at controlling biofilm.

Chlorine dioxide remains effective over a wide pH range from 4 to 10, does not react with ammonia or organic matter in the water and any residual chlorine dioxide on plants rapidly breaks down to harmless inorganic compounds.

In addition to these benefits. Chlorine dioxide, when used at high enough dose rates, will disinfect hard surfaces preventing the spread of disease-causing bacteria, fungi and viruses.

When dosed into the irrigation system at the recommended rate. CleanOxide will control bacteria, fungi, viruses, algae and biofilm. Higher rates will allow the control of micro-organisms on hard surfaces contacted by the irrigation spray such as workbenches, pots and glass in greenhouses. CleanOxide Tablets are easy and effective in disinfecting up to 50,000 litres of water. CleanOxide Liquid 75 from Natural Water Solutions is a simple modern method of generating high purity chlorine dioxide as and when required by mixing two precursor solutions.

At high concentration CleanOxide Chlorine Dioxide removes established biofilm that lines irrigation systems, clogs emitters and can potentially harbour pathogens. For continuous application, a low concentration of chlorine dioxide can be used to maintain clean irrigation lines and to inhibit algae and diseases.